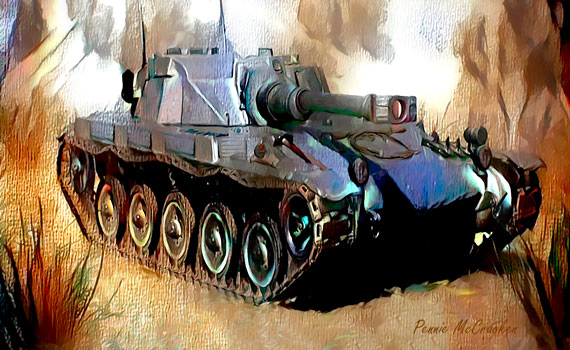 In Britain, William Foster & Co created the first prototype of the British Mark 1 tank, in the Fall of 1915, nicknamed Little Willie. Initially the tanks were going to be called Landships, but they were called tanks to help keep the project a secret. The word ‘Tank’ was chosen as the factory workers at William Foster referred to it as “the tank” because of its resemblance to a steel water tank.

Even though the British were the first to create the ‘tank’, the French were quick to follow introducing their tanks in 1917; they produced more thanks than the other countries at war, combined.

The Germans started to produce their tanks only as a response to the allied tanks on the battlefield. Several thousand tanks were manufactured during the world, but the Germans only deployed twenty of their own!

This image is not of Little Willie it is a semi-abstract painting of latter-day model tank!

Thank you very much Kirt 🙂

Wonderful job Pennie. You show the way the manufacturers saw it. As a magnificent creation. A Creation in itself separate from the darkness of its task.

Thank you Vanayssa :). It was quite the invention for back then. A necessary evil I guess!